How we’ve made our Techstars team video on a budget 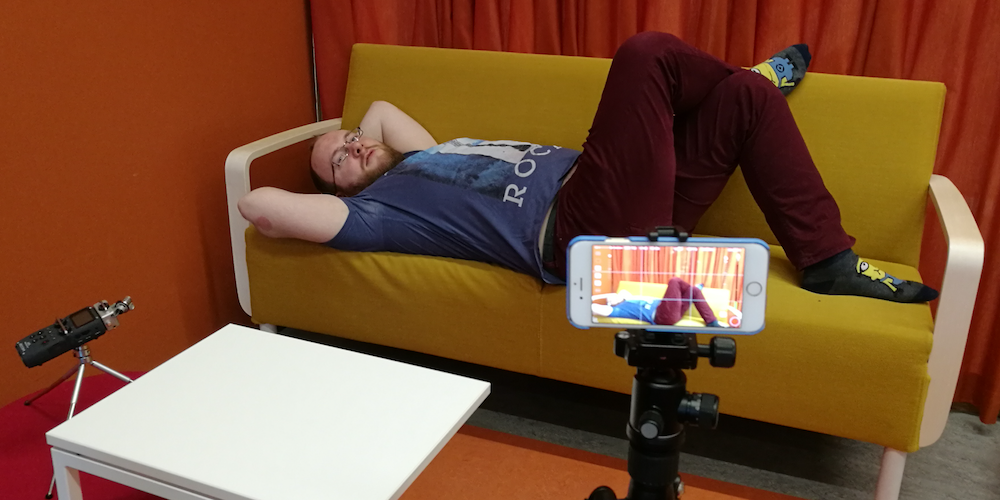 Every startup in the world (well, almost) has this ultimate dream - get into Techstars. It’s justified - 75% of teams raise seed funding straight after the Techstars Demo Day. We aren’t any different and decided to apply to Techstars London. But a mandatory field on any application is a short video introducing the team. Here's how we've made our Techstars team video.

(If you don’t really want to know the process of making the video, but just want to watch it – here’s you go)

If you are part of the startup ecosystem in any capacity – asking this question will get you laughed out of the room. Techstars is considered one of the best accelerator around. It’s the one every tech startup aspires to be part of. Techstars run a number of programs around the world and have recently launched what they call “Vertical programs” in collaboration with enterprises (e.g Alexa Accelerator – for companies advancing the state of the art in voice-driven technologies).

Techstars is like a military boot camp for 3 months where teams are forged into some of the best and most performant in the world. So, it’s not a surprise, that right after the Demo Day (which is the culmination of any program attended by hundreds of investors), 75% of teams raise seed rounds. Alumni include companies like Digital Ocean, SendGrid, Twilio, Uber.

Techstars are proud of the success of their companies (and rightly so), so they post very detailed stats on their website.

How do you get into Techstars?

Getting into Techstars is not easy at all. They get around 1500 applications for every program and they select only 10 teams. So, do your math – it’s 0.66% success rate!

But this is what’s special about Techstars – they are all about the team. It’s not the product, not the stage or the market – the team is the most important element to success.

But everything starts with an online application. It’s straightforward enough asking about things like how long did you know your co-founders, what are some of the amazing things each one of you built before, why are you uniquely qualified as a team to solve the problem, etc. They follow with some questions about idea, traction, competition, etc.

But, a mandatory part of any application is a 1 minute long team video. Optionally (but highly advisable) – you can also add 1 minute long product video.

Where to start with the Techstars team video?

There’s a lot of blog posts written about how to make a team video for Techstars, some great examples (like the Digital Ocean team video from back in the day), even articles by people assessing the videos at Techstars on what they are looking for.

Reading all of that is good. But as a bootstrapped startup with almost no budget (let alone for professional crew) or any videographer friends – what do you do?

Well, we’ve tried to get the best result in record time without any costs (well, almost). We didn’t want it to end up as a completely crappy, unrehearsed vertical smartphone video, so there’s actually quite a preparation required to make the final result look decent.

As a project manager by trade (and deep in my heart) – I cannot let things flow naturally. I want to be able to pre-plan carefully and follow the plan to execute. This was no exception. But it was actually quite helpful. You see, we had to fit within the 1 minute limit, film in multiple locations, have some props ready, ensure dialogues convey the message, etc.

So, I recalled my days working in advertising agencies and watching creatives throwing ideas around about the next advertising production – the format they used to communicate their ideas were storyboards. It’s actually a collection of boxes on a piece of paper where scenes are hand-drawn and sometimes briefly described. It’s used for any type of video production.

So, i took a heap of A4 sheets and some sharpies. And this is what I got…

I am terrible at this kind of thing, but it was doing a job. Now that I have put my thoughts on paper, it started to become clear what the overall plot would be.

But that was not enough to give us clarity on timing, script, etc. So I had to take it a step further.

I am sure there’s a more appropriate name for this in a professional world, possibly even a multiple set of documents for this purpose. But because timing was super important for the team video – I had to ensure I can visually attach the dialogues to the storyboard and time things.

This was doing a lot things and was super helpful on a number of fronts:

Now that all was done and agreed with the team – we were ready to shoot.

Our Techstars team video had a number of scenes in different locations – so we had to plan ahead. There were takes at my home, in a playroom, some were outside at the bus stop, some – inside the bus. There were also scenes inside an office environment and in a conference room. Again, thinking through your scenes and creating a storyboard greatly improves your chance of picking the right location by giving you time to choose and test out.

We’ve gone for the quickest and cheapest solution. I did have a Canon 5D MKII with some nice L-series lenses so we could actually have done it properly and probably got a much higher quality, but a.) it would have taken longer b.) i needed some extra equipment to ensure synced sound recording c.) the point of the Techstars team video is to show the team and creativity, not a stellar footage.

So we went with an iPhone 6S. Nowadays, smartphones have great cameras with superb resolutions and full control over the settings (a bit later on that). iPhone 6S can churn out 4K videos! But because the video would only ever go to YouTube – we were perfectly fine with Full-HD resolution of 1080p at 60fps.

The stock Photos app on the iPhone gives you some control over the video setting, but it’s limiting. So after reading some reviews we went with a great little app called Mavis (iTunes – $16.99).

Mavis gives you full control over your phone settings for video shooting and offers some pro features like zebras, focus peaking, exposure, color temperature control, etc. In addition, it allows to select from a much wider array of resolution/framerate combinations.

One of the reasons we went with Mavis is it’s enhanced control over audio – even without an external microphone, it gives you superpowers over built-in microphones on the iPhone (little did I know that iPhone has 3 microphones – bottom, front and back!) – allowing to select which one to use and even select a pick-up pattern for each. However, Mavis shines the most with external microphones – supporting virtually all and allowing to control gain and offers monitoring through headphones.

Even though there are 3 microphones on the iPhone – they are quite bad for proper audio recording. So, we needed and external mic, and we were lucky that one of us plays in a band and could borrow the superb Zoom H5 from the recording studio. I won’t go into much detail about the microphone (there are plenty of raving reviews online), but just say that – it’s a proper professional tool with the sound quality to match.

Zoom H5 we had access to has a USB audio device mode specifically for iOS devices. iOS natively supports that, but you’d need a special cable – Apple Lightning to USB 3 Camera Adapter. Don’t get confused with the name – it surely can be used to connect a camera to an iOS device, but works perfect with all external USB microphones. Additionally it offers power pass-through to either the external microphone (if it needs the power. Zoom H5 didn’t) or the iOS device itself. This is great as you can charge your iPhone or the iPad whilst having an external USB microphone connected

The day of the shoot

As we were shooting a number of scenes in different locations (even in different countries!) we shot at different days and in different order. However, there was a main part to the video where we all gathered in a single location.

All prepped and ready to roll, we couldn’t be more happier that we had our timeline to hand – this allowed us to know how long we had for each sequence, what the script is, etc.

The great thing about the iPhone setup is that you could straight away review the footage on either the iPhone or quickly drop files to a Mac and watch on the bigger screen.

We really wanted as little post production as possible, but in order to give the video a bit more polished look, we’ve used Final Cut Pro X. It needs no introduction. Some years ago I played around with FCP7, and I should say, Final Cut Pro X is such an improvement! It’s a really powerful video editing application sometimes even used by Hollywood crews, but the UI and the flow is clear for an average user like me almost instantly. Also, it had no issues running on my 13” Macbook Pro.

So, why did we need to use Final Cut Pro? Here’s a few things:

As I already mentioned, Final Cut Pro is a professional tool capable of so much more. There’s even more tools available from Apple for video production – Motion (for special effects) and Compressor (for pro-grade video encoding).

But Final Cut Pro was a great choice for us even allowing to upload final video to YouTube right from the app.

Let me start with a couple of caveats.

But nevertheless, I felt the urge to share the process of creating the video and the final results – because we as a team are quite proud if it!

So, without further ado, here’s Techstars team video from Price&Cost:

Plan, track and continuously improve all financial aspects of your projects